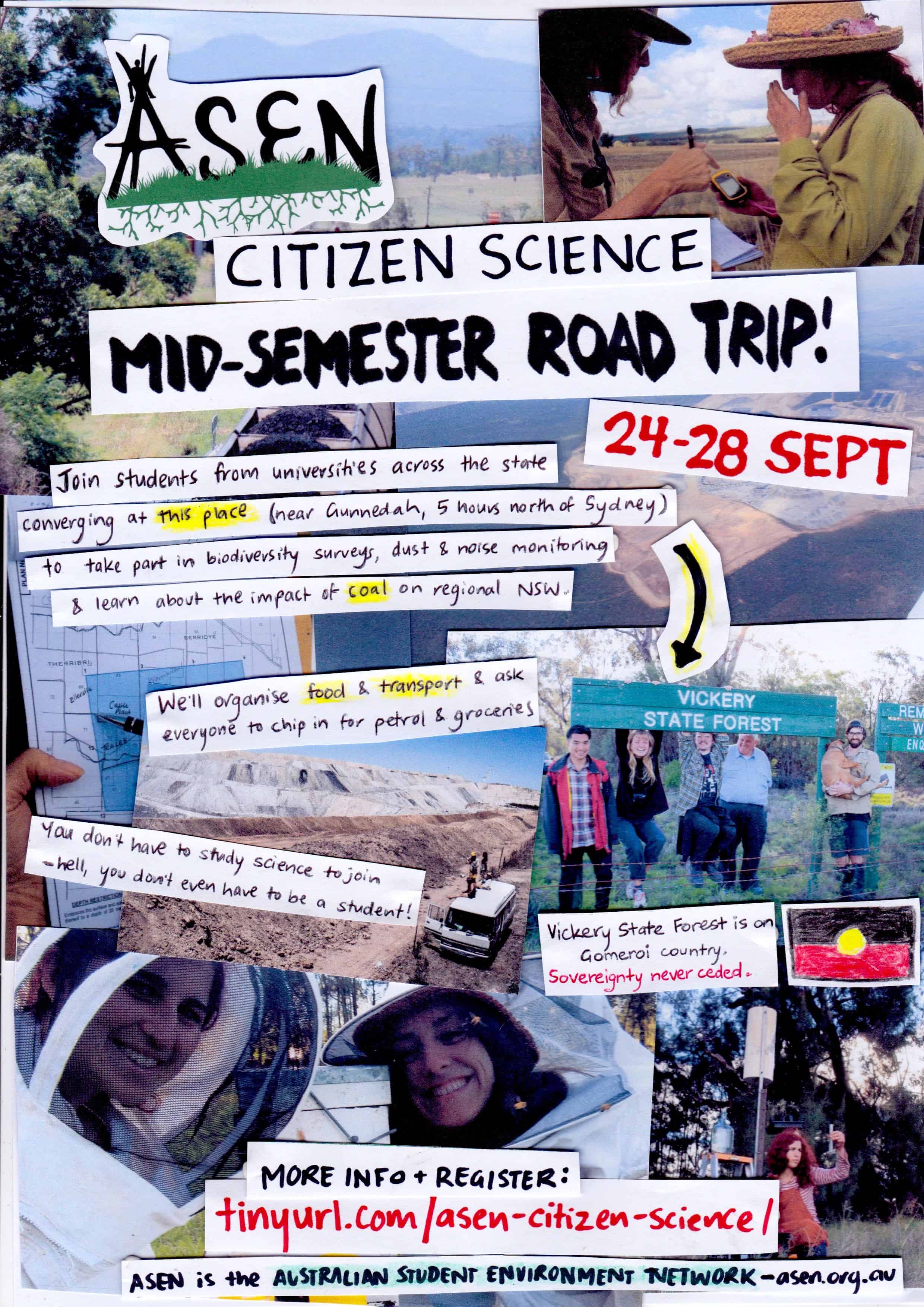 This mid-semester break, ASEN NSW are heading up to Vickery State Forest on Gomeroi country to take part in citizen science efforts and learn from traditional owners and community about the effects of coal mining on livelihoods in the New England area.

It’ll be happening from 24-28 September (Saturday to Wednesday) with ASEN organising carpooling and food in exchange for attendees chipping in to cover costs.

Find out more on the facebook event, at the info night happening at UNSW (Tuesday 6 September 5pm Quad G027) or by emailing nswact[at]asen.org.au . And don’t forget to register at tinyurl.com/asen-citizen-science ! All welcome, including non-students.

When receiving an award for her proficiency at exploration geophysics, Jodie dropped a banner to draw to attention how University research is often driven by private interest – to the detriment of the urgent issue of climate change. 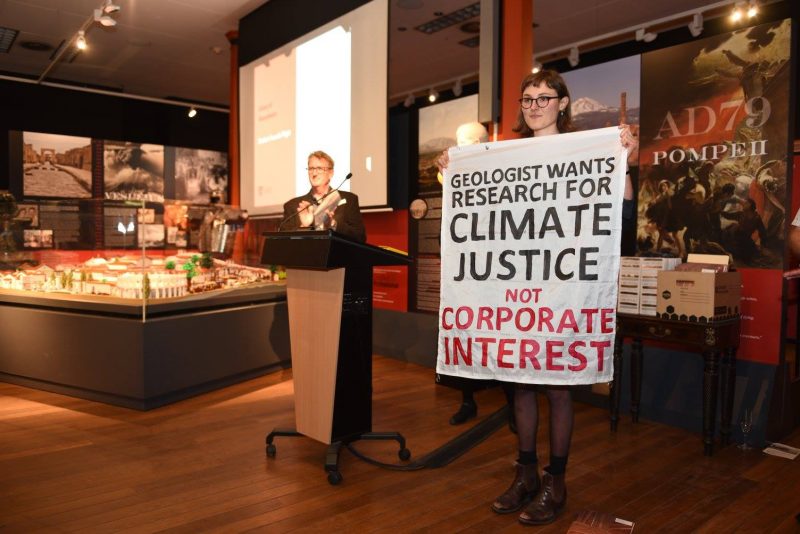 I dropped a banner at the School of Geosciences awards night earlier this year that read, ‘Geologist wants research for climate justice, not corporate interest.’  As an environmental activist, it seemed ironic to be receiving a prize for being a whiz at the methods used in locating coal, oil and gas reservoirs for resource extraction. I doubt I am the only geology student or researcher at the University of Sydney grappling with the dilemma of loving the science of geology, but not at all wanting to be involved in mining.

The imminence of the threat of climate change in abundantly clear, as is the contribution of fossil fuel extraction to this ecological emergency. Geoscientists work and research at the intersection where human livelihoods meet the geo-hydro-biophysical and ecological systems that our lifestyles are embedded in, and this research consistently shows that we’re rapidly approaching planetary limits. This is why I find it so bewildering that geoscientists here at USyd seem to be doing so little to pressure the university to show leadership on climate change.

As an undergraduate majoring in Geology, my academic learning has heavily incorporated mineral and resource extraction, which has been undeniably underpinned by corporate interests. Time and time again, I read in Unit of Studies outlines of how each geology course will equip me with the graduate skills sought after by mining industries. I am upset that hydrogeology, urban geology, geomorphology, environmental geology and oceanography aren’t offered as subjects. It is dispiriting that at industry information evenings, the majority of speakers are directly employed by mining companies, which may lead one to believe that there are no legitimate career options for geologists outside of extraction industries.

In second year I was appalled that my ‘Fossils & Tectonics’ lecturer told us to invest in mining projects in the Bowen and Surat Basin in Queensland. Moreover, he would turn off his lecturing microphone and ask us to legitimately consider ‘creation science’, specifically the idea that rocks dating back millions of years were created by God six thousand years ago and were designed to record ages that, when radiometrically dated, would pre-date the creation of Earth. It was infuriating, and because complaint procedures were not sufficiently anonymised and there were no recordings, there was no avenue for students to protest.

I’m not naïve about the relationship of geologists and resource extraction in Australia. I also know that in the current political climate the corporatisation of tertiary education is welcomed and free education is a relic of the past. However, I also believe that corporate interest should not dictate what undergraduate geology students study and learn. I think that the pursuit of knowledge in geology should not start from the idea that the geosphere can be reduced to an energy source. And further to that, I don’t believe that geology is incompatible with climate change research or research on alternative energy solutions, especially when those solutions can be found in the geosphere (i.e. geothermal energy).

Universities have a responsibility to pursue knowledge for the benefit of society as a whole, rather than pursue only a profit motive. It is disappointing that despite the university’s advertising slogan, ‘Leadership for good starts here,’ USyd has shown an incredible lack of leadership in actually doing something about climate change. Notably, no steps have been taken by the Vice Chancellor Michael Spence to honour the university’s 2015 commitment to divest 20% of their investment portfolio from fossil fuel and extraction projects by 2018.

By the time I graduate, it would be truly novel to see this university honour its divestment commitment and show true leadership, like La Trobe University has done recently. It would be fantastic to see the geosciences school respecting the intelligence of the students by actively engaging with climate change discourse and by challenging the university to be the leader in the sustainable future that it fancies itself to be.

Yesterday the ASEN road trip crew travelled up to Newcastle and was taken for a tour of the Newcastle Port by our travel guide Jonothan Moylan. From Nobby’s Headland, we saw the dredging boat taking out sediment to dump it offshore widen the channel to accomodate more coal exports. We stood over the large arterial railway that takes coal trains to and from the port day in and day out, not even breaking for holidays. There coal trains are not covered and the coal dust poses a health risk to the 23,000 children who go to a school within 500m of the train line.

END_OF_DOCUMENT_TOKEN_TO_BE_REPLACED 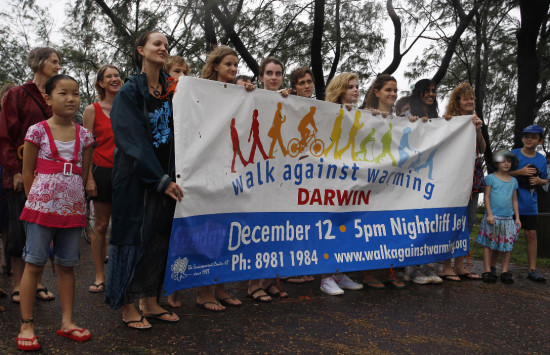 Friends of the Earth Sydney collective put this 16-page booklet together as a resource for climate justice action – for people organising in their communities and in their workplaces.

Right now, all eyes are on climate change stories – whether it’s the upcoming international talks at Copenhagen, or the new coal-fired power stations being proposed to meet Sydney’s future energy consumption. But we don’t always look at what debates over ‘parts per million’ and emissions trading mean in human terms: who will pay, whose land is being mined or covered with private plantations, and whether ‘green’ industries are creating jobs where workers have a real voice in their workplaces.

We think climate justice is about which solutions to the climate crisis we campaign for, and how we campaign for them. This Climate Justice Kit includes short stories from across the world of communities that are fighting for clean air and secure livelihoods in the face of big polluters and offset entrepreneurs; as well as some key facts, like who is going to bear the heaviest burdens of climate change.

You can download the Climate Justice Kit here: http://tiny.cc/KW2Qg

Regardless of what businessmen and politicians do in Copenhagen (or any other capital cities), people across the globe will keep fighting for real solutions. We hope some of our ideas for action will be a useful contribution to that struggle in Australia.

If you’d like printed copies mailed to you, let foesydney@gmail.com know how many you want, your name and address.

If you have comments or questions, are keen to do a workshop or an action with us, we’d love to hear from you!