The blockade will be on from 7 p.m. till 5 a.m. Wednesday, and then again for the same duration Thursday.

‘The KSU at a meeting Tuesday decided to intensify its stir… to protest the Meghalaya government’s decision to lease out land to the Uranium Corporation of India Limited (UCIL),’ said KSU president Samuel B. Jyrwa.

‘The KSU believes the uranium project would harm the environment and health of people living adjoining areas,’ Jyrwa said.

The state government has tightened security across the Khasi and Jaintia Hills of southeastern Meghalaya.

‘We are concerned that the proposed road blockades may affect other northeastern states too,’ Meghalaya principal secretary (home) Barkos Warjri told reporters here.

Police heads of the four districts — East Khasi Hills, West KhasiHills, Jaintia Hills and Ri-Bhoi — have been asked to see that the traffic flow along the national and other highways are not disturbed due to the night blockade.

Chief Minister D.D. Lapang told reporters: ‘The uranium reserves are a national property and no one can stop the government from using them.’

‘The government has waited for 20 long years to persuade the people to allow uranium mining at Domiasiat in West Khasi Hills district of southern Meghalaya.’

The KSU and local parties have been spearheading the movement against the Meghalaya government’s decision to allow the Uranium Corporation of India Limited (UCIL) to carry out pre-project development programmes in 422 square hectares in the uranium-rich
areas of West Khasi Hills.

A senior Meghalaya government official said the union ministry of environment and forests had already allowed UCIL to start uranium mining for the annual production of 375,000 tonnes of uranium ore and processing of 1,500 tonnes of the mineral ore per day in West Khasi Hills district.

The UCIL has proposed a Rs.1,046 crore open-cast uranium mining and processing plant at Domiasiat in the West Khasi Hills district. Meghalaya has an estimated 9.22 million tones of uranium ore deposits.

On May 1, BHP Billiton released the Environmental Impact Statement for its planned expansion of the Olympic Dam (Roxby Downs) uranium/copper mine in SA. A May Day protest was held to voice many members of the publics opposition to the mine and its expansion.

At 2.00pm a mock BHP executive launched the EIS complete with details of everything the company plans to get away with:

· The mine operates under the SA Roxby Downs Indenture Act which exempts it from key environmental and Aboriginal heritage laws that apply everywhere else in SA.

· BHP Billiton plans to make Roxby the largest open-cut mine in the world. Export of uranium is expected to increase from an average of 4,000 tonnes per year to 19,000 tonnes. Enough plutonium to build 2,850 nuclear weapons each year.

· The production of radioactive tailings, stored above ground, will increase seven-fold to 70 million tonnes annually. The tailings contain a toxic, acidic soup of radionuclides and heavy metals.

· Electricity demand for the mine will increase from 120 megawatts to 690 megawatts – equivalent to 42% of South Australia’s current total electricity consumption. 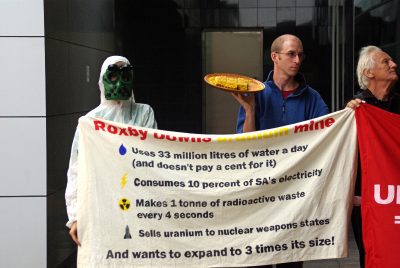 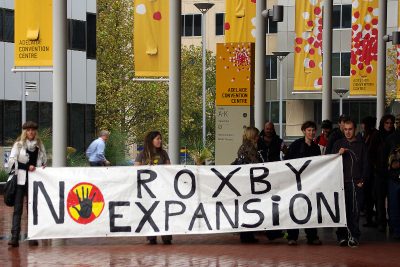 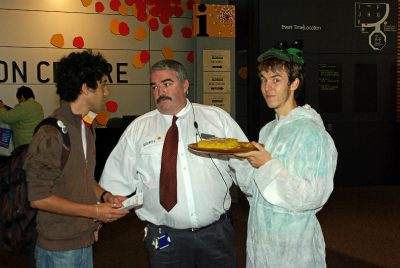 A big thanks to those who came along to the fantastic public meetings in Sydney and Wollongong last week: hearing from Northern Territory Traditional Owners speak out against the proposed nuclear waste dump at Muckaty.  The public meetings and protest of the World Nuclear Fuel Cycle Conference on Wednesday morning were fantastic!

You can check out information, campaign materials, films and more at: http://beyondnuclearinitiative.wordpress.com/

Below are two speeches from a public meeting at the Illawarra Aboriginal Cultural Centre on Dharwal country (Wollongong) on April 22, 2009.

A couple of weeks prior to the meeting, a shipment of spent fuel rods from the Lucas Heights nuclear reactor had been transported in the dead of night through Wollongong to be taken out of Port Kembla in New South Wales.

Dianne Stokes, Mark Lane and Mark Chungaloo (Traditional Owners of the proposed federal radioactive waste dump site at Muckaty in the Northern Territory ) were keen to meet with other communities affected by the Lucas Heights facility- if an NT dump is built then these fuel rods are eventually mooted to be dumped on their land.

Some of the news coverage of the protest:

Garrett urged to speak up on nuclear issues

Politicians, Aboriginal leaders and environment groups have joined forces to protest against an international conference on the nuclear industry, currently meeting in Sydney.

The coalition is also calling for an end to the Northern Territory radioactive waste dump proposal.

Greens Senator Scott Ludlum says the Labor Party has had a year and a half in Government, but still has not dealt with radioactive waste management issues.

He is calling on the Environment Minister Peter Garrett to consult on the issue.

“It’s been an incredible disappointment to me that Peter Garett as Environment Minister has completely gone missing on this issue, and the Prime Minister has given the running of radioactive waste on uranium mining issues to Martin Ferguson, the Industry Minister,” he said.

“We’re not hearing from the Environment Minister and that’s why the Greens and the community groups who are represented here today are stepping up to do his job for him.”

Dave Sweeney from the Australian Conservation Foundation says sustainable energy rather than nuclear power is the way forward.

“There are jobs, dollars, export growth and the ability for this country to be a platform for a sustainable energy future,” he said.

“Now we can be that, or we can cling to the coast and let our country become a quarry and the increasing pressure for material that goes out as ore to come back as waste to be perpetually stored here.

“That’s not a future we want to see.”

Noisy protesters are targeting a global nuclear conference in Sydney, saying they want attendees to know they are not welcome.

About 60 people from a group calling itself the Sydney Anti-Nuclear Coalition were on Wednesday demonstrating in front of the Elizabeth Street hotel playing host to the World Nuclear Fuel Cycle conference.

The coalition is mainly made up of environmental, student and trade union groups.

Police dragged several protesters away after they tried to get into the building and ordered the demonstrators to move on, but made no arrests.

The conference is a nuclear fuel industry event, held annually at different locations around the world.

Australian Conservation Foundation spokesman Dave Sweeney played down the scuffles and praised the group for braving the wet weather to turn out.

“It’s been a bright and bouncy protest. It’s had a bit of passion as it should, because there’s high stakes here,” he said.

“There are people here from Perth, from Melbourne and the Northern Territory and nationally there is a very deep concern about all things nuclear in Australia.”

Mr Sweeney said arguments that nuclear fuel was a green alternative to coal power were not acceptable.

“You can’t call an industry that creates a waste that’s a carcinogen for 250 million years clean or green,” he said.

“It (nuclear energy) is not going to ride over the hill as a white knight and save us, it’s not a solution to climate change.

“It’s expensive and linked to the worst weapons and the worst waste.”

Greens Senator Scott Ludlam said it was important for people to voice their concerns about nuclear energy.

“The nuclear industry needs to know that wherever they set foot in Australia, we’ll have a presence,” Mr Ludlam said.

“Sometimes it’s important to just confront them and let them know they’re not welcome here.”

The Australian Student Environment network is a member of the Australian Nuclear Free Alliance, an alliance of Aboriginal nations facing and fighting the nuclear industry and environmentalists and supporters.

The Australian Nuclear Free Alliance (ANFA) has today dismissed moves by the Australian Uranium Association to reposition itself as the solution to systemic Aboriginal disadvantage through the formation of an Indigenous Dialogue Group.

“The uranium industry’s attempt to promote itself as a cure to Aboriginal poverty is in direct conflict to the reality of the Aboriginal experience,” said ANFA Committee member and Adnyamathanha custodian Jillian Marsh. “Extensive case study research and the concerns raised by Aboriginal people at the grass roots level shows that mining agreements have not improved life for Aboriginal people and uranium mines mean more problems.”

Late last year a detailed examination of hundreds of mining agreements by the Native Title working group found that less than twenty had brought significant benefit to Aboriginal communities.

“It is cynical for the uranium industry to act as if it can deliver for Aboriginal people. The main lasting effect of uranium mining for Aboriginal people is radioactive waste on their country, and no resources to clean up the mess left by miners,” said Ms Marsh. “This is a worldwide phenomenon; Australians are one part of a global assault inflicted by mining corporations and governments who care more about profits than about long term effects on our Nation and our lands.”

Formed in 1997, the Australian Nuclear Free Alliance brings together Aboriginal people and environment and public health groups concerned about existing or proposed nuclear developments in Australia, particularly on Aboriginal homelands.

The Alliance provides a forum for sharing of knowledge, skills and experience and an opportunity to come together to protect country and culture from nuclear developments. We provide this service in response to the lack of free and informed consent and decision-making that is gripping the Impact Assessment procedures supposedly in place to regulate mining industries, and the pro-mining position taken by leaders within Native Title and Aboriginal Land Rights in Australia.

The Alliance helped to build the successful campaign to stop the Jabiluka uranium mine in the Northern Territory, and more recently, a proposed national nuclear waste dump in South Australia.

ANFA Committee member and Kokatha Mula custodian Sue Coleman Haseldine said: “Aboriginal people have been and remain at the sharp end of resistance to the uranium and nuclear industry in Australia and we are not about to be swayed by an industry PR exercise.”

Information about the Alliance is posted at: <www.foe.org.au/anti-nuclear/issues/oz/alliance>.